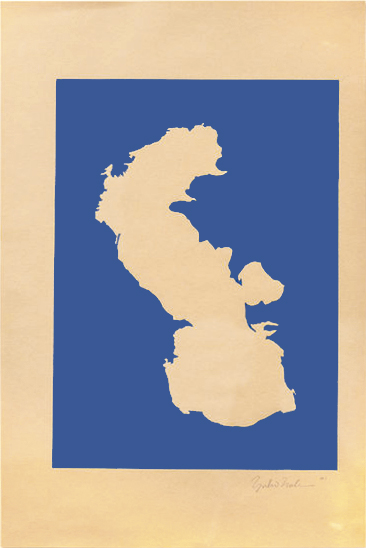 Every collection begins with a single piece.

The first in SKAM’s: Yuki Nakamura’s simple screenprint of a blue expanse with an empty island, registered off-center and -kilter, procured in a sudden flash sale at the artist’s show at Howard House Gallery.

I was in my early twenties when it happened. At that time I was a collector of memorabilia. A lifelong lover of music, and a photographer and designer myself, my apartment was decorated with my own photographs, of architecture and events, of friends and family; and visual displays of my love for bands: show posters and limited edition tour screenprints by artists I loved online.

I was at the frame shop where I’d worked for a year or so, when a regular customer came in excited about a print they’d just bought. They told us the artist had just dropped off a stack of them, many available for exceedingly low prices. The gallery was two doors down from the shop, and it was a favorite. We framed a lot of work for the galleries in the neighborhood, and at Howard House, I’d seen shows which inspired my earliest endeavors in the art world—memories of a few still inspire me fifteen years later.

I went immediately to the gallery and found this blue beauty among the stack. I was struck by its color and simplicity, and considerate of the ink, which had everything to do with the water and not the island for which it was named. I found comfort in all of its negative spaces, so I bought it right then and there with cash I had in my wallet.

Though other works preceded it in some form of ownership in my life, it was the first I recall the feeling of acquiring. An intangible essence was imbued in this ink and paper, indicative of a larger idea, a bigger story, and I had been there, at the right time and place, to afford a piece of it.

It has hung on a wall in every apartment I’ve lived since.

Click to browse the collection or learn more at skam.ltd